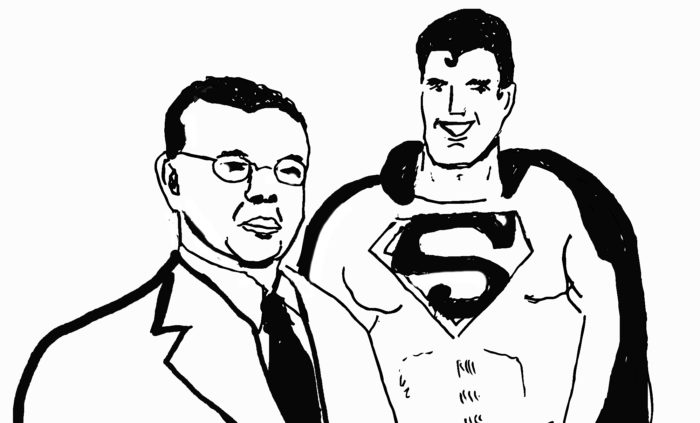 On this day in 1938, the first true superhero comic book was born. And the artist? Joseph “Joe” Shuster.

You might think that Joe lived a charmed existence after Superman became a hit. Instead, Joe’s life was wrenched by a series of unforeseen tragedies, starting with selling the rights Superman for a mere $130.  For a couple of comic book guys back then, this wasn’t unheard of.  Plus they received a contract to keep coming up with new stories.  What more could you ask for?

Later, after Superman had become a success, the pair tried to void the contract. No dice. Eventually after more legal hassles, the comic book company used other artists and writers to create new Superman stories, and removed Joe’s name from the title altogether.

As you might guess, Joe’s career headed mostly downwards after that. Despite trying to create another smash hit, he couldn’t find much traction with titles like Funnyman (a TV comedian becomes a superhero, using practical jokes to render criminals helpless!). Eventually Joe’s eyesight went bad, preventing him from drawing. He worked as a deliveryman to keep food on the table, moving in with his mother for a time.

The only saving grace for Joe was a protest movement in the ‘70s that helped restore his name to the Superman franchise. In order to not incur the wrath of the public, DC comics also agreed to give him a yearly stipend of $20,000 and health insurance (later raised to a whopping $30,000). Despite this backhanded acknowledgement, Joe fell into debt and died of congestive heart failure and hypertension.

So why is Joe’s story one that a SuperOptimist can celebrate? Because Joe created what is arguably the most successful comic book character in history! Because he was a human being and made mistakes in areas that he wasn’t skilled in, like reading fine print and engaging in corporate malfeasance! Because he had to deal with pain and suffering like we all do! Because many artists get ripped off during their lives by corporate entities, and yet the white collar criminals who screwed Joe out of his creation will die in anonymity, while Joe remains a true American hero!

Finally, would there be a SuperOptimist with a Superman? Probably not! So here’s to Joe Shuster. May his creation continue to battle the forces of evil, and take out a few corporate attorneys in the process!