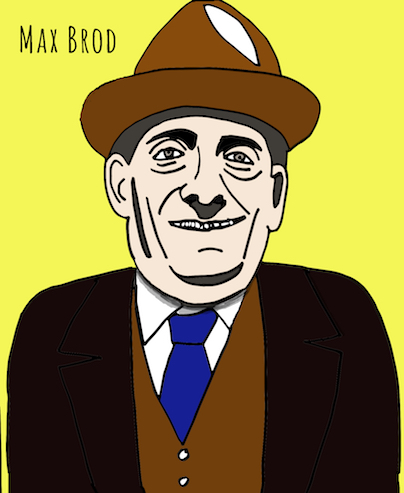 O glorious day! For July 3rd is the anniversary of Franz Kafka’s birth.

And yet, we prefer to roll out the sheet cake for his friend Max Brod.  If not for dear Max, we’d have no idea who Franz Kafka even was.

As it turns out, Mr. Brod was the reticent author’s lifelong pal and literary executor. In failing health, and having received little acknowledgement for his storytelling efforts, Kafka entrusted Max to destroy all his unpublished work upon his death. But when Franz finally met his maker,  Brod ignored his deceased friend’s wishes. Instead of torching Kafka’s manuscripts, he had them published instead.

Without Brod making that fateful decision, Kafka would have remained an anonymous insurance man who wrote fiction on the side. And we would not have  “The Trial,”  “The Castle” or “Amerika” to read, ponder and cherish.  So on this blessed July 3rd, we give thanks for Max Brod — and the reminder that it’s occasionally beneficial to listen to voices other than our own.