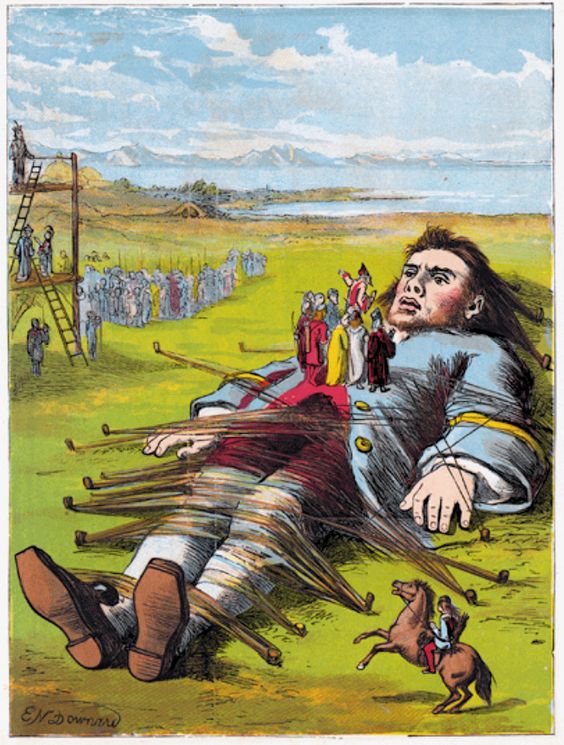 Do you ever feel like you’re being held captive by societal norms?  (You know, all the nonsense you’ve absorbed over the course of your life from well-meaning parents, teachers and authority types.) It’s as if you were Jonathan Swift’s Gulliver, tethered by ropes. Except yours are internal and prevent you from unleashing the full power of your imagination on the universe.

So what’s a simple way to unglue yourself  and experience blue skies again?

At SuperOptimist headquarters, when the walls start closing in, we turn to artists of the Dada period for inspiration.  Emerging from the ashes of World War I, Dadaists saw society’s view of “normality” as irrational and created art that completely challenged traditional views of class, religion, politics, technology and morals.

Their reactions to society’s hollow constraints are just as valid in 2021 as they were a century ago, when Tristan Tzara published a short poem on how to free yourself from rigid thought with an act of anti-authoritarian aplomb.

Découpé (or cut-up) is performed by taking any piece of linear writing — say, a newspaper article, a page from a book, or the instruction sheet for plugging in a wifi router — and remodeling it in a spontaneous and uncontrolled way. By doing so, you will bypass the inner critic who demands that things be neat, ordered, and understandable.  Here are Tzara’s instructions, slightly modified.

Cut out each of the words that makes up the piece of writing.

Put the words in a bag, a hat, or shoebox.

Remove one word at a time from the bag.

Copy the words in the order in which they left the bag.

According to Tzara, the poem that you construct will resemble you.

While a newspaper article is a perfectly good material for your initial foray (after all, they’re basically publishings the same stories now that they were in Tzara’s time), we prefer taking an expensive book that society has deemed important and valuable, and cutting up a page to prove that even “great art” should not be held in such high regard. This is a good step to freeing yourself completely from the social construct, and letting your superego know who’s boss!

As you contemplate your next act of non-compliance, enjoy this short film that brings Dada into the present, and see if that doesn’t shake you loose from whatever’s holding you back. Better to embrace nonsense like this than the nonsense we call “success.”