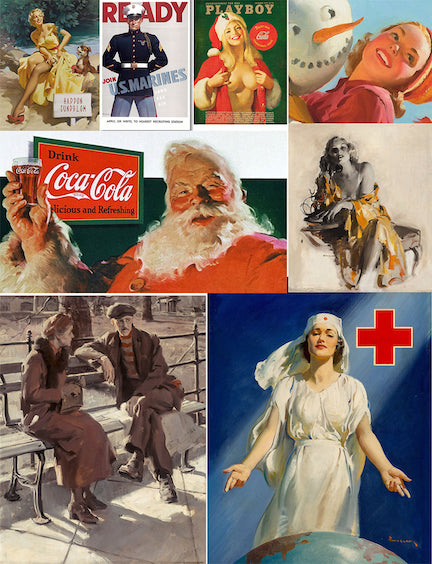 We’re particularly impressed by the powerful and iconic paintings of the artist Haddon Hubbard “Sunny” Sundblom (June 22, 1899 – March 10, 1976.) This stuff is brilliantly painted and aims an artistic arrow into the heart of Americana. We’ve done some research into exactly how he approached oil painting and we share it with you here:

When painting, Sundblom would work from dark to light, and thin to thick, utilizing a wet-into-wet (or ala prima) approach in laying down heavily loaded strokes of color. This technique of working while the oil was still wet allowed Sundblom to complete many of his illustrations in only one or two sittings. He was a remarkably fast painter, and his speed helped him to maintain a sense of freshness and spontaneity in his work. When Sundblom first sat down to consider a picture, he would start by making loose, rough sketches.

According to Harry Ekman, an artist who worked with Sundblom in the late ’50s, “He would sit down, and roughly—I mean quite roughly, sometimes on monogrammed stationery—make very abstract sketches. You could recognize some substance to the doodles, but they were mostly value sketches. He would make many of those and just keep going until he got an idea. Then he’d call in his models and take photos. When he started out he used models and worked from life, but by the ’30s, ’40s, and ’50s, you’d have to pay $30 to $50 an hour for models, so it became prohibitively expensive.”

Not surprisingly, Sundblom often used his neighbors, colleagues, and three young daughters as stand-ins for many of his illustrations. After taking the black and white reference photos, he would make a quick but highly accurate charcoal drawing on his canvas, and seal it by fluffing pumice across its surface, blowing ethereal varnish or shellac on the board with a spray atomizer. Unlike some other illustrators, Sundblom only used the photos for a reference, never trying to copy the actual look of the photograph. Sundblom very rarely used a Balopticon projector, as many other illustration artists of the day were doing to save time.

“He believed that if you were doing an illustration for a story, you should enhance the story. You should always add to it,” Ekman said. His goal was iconic powerful images and copying photography alone would never deliver the iconic power he sought.

Alexander Kortner, an illustrator and protege of Sundblom’s, said, “He was a terrific draftsman in his own right. He would first make a sketch from nothing, just out of his head. Then he would use some reference photos to construct his drawings on canvas with charcoal. He very seldom used a Balopticon, and he never stayed too close to the reference photos. He drew with the brush as he painted. His drawing on canvas was never very detailed, but it was beautiful in and of itself.”

Then he would start in painting, and it was miraculous the way he mixed colors from a rather ordinary palette of 12 tube colors and his only medium was turpentine. Few people ever actually saw him paint, but I did,” Kortner said. “He would start with big bristle brushes and rough in the whole thing in an hour or two. He was very, very fast. It’s surprising how much he could do with a big brush. in a demonstration for an artist’s group in Chicago, he’d make a painting in about an hour and a half at the most, and it’s a beautiful thing. At the end of the demo, they would raffle it off to whoever was there. He didn’t do demonstrations too often because he wasn’t fond of it, but he would do them occasionally for the Chicago Artist’s Guild. He would start with a raw canvas and start right in. Some of the best illustrators in the city would come to the demonstrations just to watch him work.”

If you want to try to work in the Sundblom style, one of the best ways to modify your current habits and be more Sundblom-esque may be to set a 60-minute timer while you paint. Try to force yourself to work faster than you normally do. Don’t be fussy or precious but strive for accuracy and efficiency. Get that idea down in paint! Remember, the client expects your great iconic art done by tomorrow. Better get moving 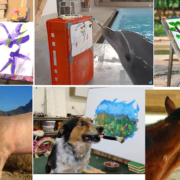 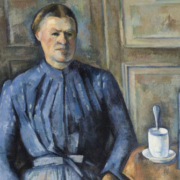 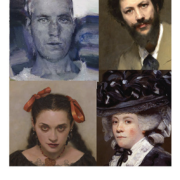 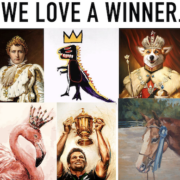 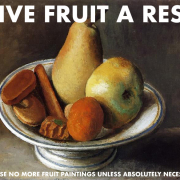 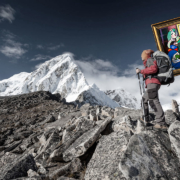