Edgar Allan Poe, master American author and proto-goth innovator of the macabre, knew how to make the best of things.

In 1835, Poe, then 26, obtained a license to marry his 13-year-old cousin Virginia Clemm. They were married for eleven years, by all accounts a loving and respectful match, filled with true romance. One evening in January 1842, Virginia showed the first signs of consumption, now known as tuberculosis, when she indelicately vomited blood while playing the piano.

Virginia lived another five years in a state of pallor, weakness and lingering sickness as she approached the grave. But Poe turned this horrific situation to a creative bent,  developing a theory that “the death of a beautiful woman” was the “most poetical topic in the world.” This became his touchstone of gothic writing, like his most famous poem, “The Raven” — exploring themes of death, sickness, and the ghostly lives of captivating young women who happen to be dead.

There are opportunities in the worst situations for a true SuperOptimist, and as old E.A. Poe said:  “To die laughing must be the most glorious of all glorious deaths!”

Harry and Meghan have more problems than you. 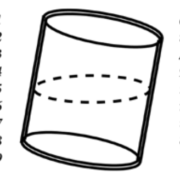 Half empty? Half full? Not your concern.

Love your obstacles, for they are many.

April 1st is for amateurs.